While I am sure most of you have heard of Project Runway let me brief you on the hit reality show. Project Runway brings new designers to a competition that gives emerging designers a chance to launch their fashion careers on Bravo Television Network. Most recently the show had its 17th season which featured some of the amazing designers who will be setting the runway on fire in an upcoming fashion show in Louisville KY this fall. I am super excited to bring these details to you guys as I am sure you will be running to purchase your tickets!

Frankie Lewis a Louisville, Kentucky native is a self-taught fashion designer who gained experience in the fashion world by way of creating costumes for her local theater while attending college at the University of Louisville. She has now finished with her segment on Project Runway and she will be hosting the Resurrections: A Frankie Lew Fashion Experience benefit show at the Cabbage Patch Settlement House (CPSH) on October 12, 2019. Frankie has a special place in her heart for the CPSH and she wanted to make sure she came home and gave back to the same community that poured into her. With her latest collection Ann DeEvelyn, and her upcoming line, Frankie Lew, she will be showcasing fashions for all types of women, even us plus sized gems! Frankie's style bucks the status quo with her sexy, chic pieces and I am beyond excited to see what she brings to the city in October. If you want to check out some of her work you can check her out on Instagram @frankiee_leww

Who all is going to be there?

In addition to Frankie let me introduce you to the other fashionable souls that will be setting the runway ablaze with their garments.

Tessa Clark is an Ohio native raised on fashion.Tessa received a bachelor’s of science degree in fashion design from DAAP of the University of Cincinnati before setting out on her professional career. Her style is inspired by her rural hometown upbringing by her father, a miller, and her mother, a potter. That alone has me super excited to see her rustic chic looks that she will bring to the Frankie Lew Experience. She created her line Grind and Glaze as an homage to the most influential people in her life. Tessa‘s line embodies a story of creativity, purpose, and imagination. With an aesthetic of minimalist, elevated casual-wear and unrefined luxury I am beyond ready to see her threads hit the runway. In the meantime in between time check out my girls Instagram @_tessaclark

Nadine Ralliford is currently based in Atlanta, GA but she was born in Jamaica. Nadine has always had a love for fashion. Since a young girl she loved sketching and creating her own ideas from scraps of old clothing. She was placed in programs at a young age that could enhance her skills that grew into a passion she would carry for life. She was inspired by her mother since she would dress for every occasion and loved high fashion. Nadine was blessed to know different cultures through her travel through Asia and Europe. Ralliford attended FIT in New York, FIDM in Los Angeles and received her BA from AIU and a degree from MIT. This gem is now a professor of fashion and has created her own brand, Ralliford Hall Designs. This is a collection that appeals to women of all ethnic backgrounds. Extravagant chic are the words that come to mind when I think about her brand and I’m so excited that Frankie is bringing her along! Check out Nadine's work and learn more about her craft on Instagram @rallifordhall

Afa Ah Loo Salt Lake City, Utah resident but Samoan born and raised in the villages of Lotopa and Falelima. His introduction to fashion was through his mother, who was a seamstress for their family providing most of their clothing. Afa was placed in home economics but quickly realized that was not the class for him and he took up an interest in sewing. His first project was creating a Sunday dress for his sister, and since then he has never looked back. Ahloo attended Brigham Young University - Hawaii. As a self-taught designer, he had to overcome his personal fears of failing. After being casted for Project Runway among a ton of shows it appears that he hasn't let his fear hold him back much these days! His aesthetic is clean and classic, with a touch of vintage. I have been creeping on his Instagram (@afa.ahloo ) for a few weeks now and I really want to see what he decides on for the Resurrections showcase!

Kovid Kapoor Last but certainly not least I have Kovid, born in the Indian Himalayan valley town of Dehradun. Although he is now in Brooklyn, New York travel isn't anything new to Kapoor. Growing up in a military family, he moved around to various Indian states with varied cultural identities and traditional art forms that influenced him. He realized clothing, better yet fashion provides representation, identity, and self-expression for everyone. He attended the National Institute of Fashion Technology, Hyderabad, for his BFA in fashion design before moving to the United States and attending the Academy of Art University in San Francisco for his MFA in fashion design. After making such a great move he realized that the language of fashion was very different from what he was used to back home. Having this insight and experience has allowed him to balance the two aesthetics from his teachings in both countries. His continuous inspiration are the women he has encountered from his childhood or from fantasy and mythological tales. His pieces heavily voice his inspirations and I am looking forward to seeing his garments breeze down the runway. Be sure to follow him on Instagram (@kovid.kpr) and check out his designs that celebrate these great figures and feminine wisdom.

Where is it again?

So far, so good! Sounds like you are ALMOST interested in joining me! It will be hosted at the Cabbage Patch Settlement House. The CPSH is a local, non-profit Christian organization based in Louisville, KY. Their mission is to equip and empower at-risk children, youth, and their families, to be self-sufficient by helping them maximize their economic, educational, emotional, moral, physical, social and spiritual potential. Feel free to check out their website as well to see how you can get involved with their amazing programs.

Okay I'm Sold! How can I get tickets?

Well I am super glad you asked! I was going to tell you anyway because that's just how I am. If you want to join us at the show click here to purchase your tickets! Hope to see you there! All details are provided in the link above along with the flyer below. Stay Posh!

"Show You How to Move in a Room Full of Vultures!"

Name Brands: Are They Truly Essential? 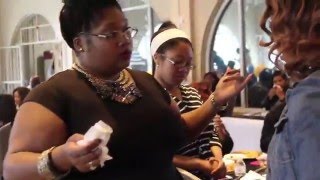